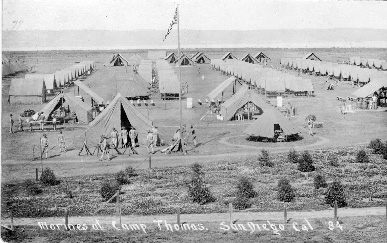 1600 HOURS, 29 July 1846: …” and the Marine Guard under Lieutenant Maddox left the …(U.S. Cyane) to take possession of the town of San Diego and hoist the American Flag….”  A combined force of some 150 Marines, sailors, soldiers and volunteers swarmed ashore, trooped to San Diego’s plaza, and raised the U.S. flag.  Without firing a shot, they captured the town.

31 October 1846: Captain Archibald Gillespie, USMC, landed a party of 40 Marines from the U.S.S. CONGRESS to make contact with General Phil Kearny, USA, in the northeast section of San Diego County.  First they successfully relieved the garrison in the city under siege from the Californian revolting against American rule.

6 December 1846: Combined forces of soldiers, sailors and Marines, under General Stephen W. Kearny, participated in the Battle of San Pasqual, located near the community of Ballena, between Escondido and Ramona.

1847-1910: Records indicated that Marines took part in all shore activity of the Navy in San Diego during and immediately following the Mexican War.  However, until 1911, there is no record of any Marines having shore duty in San Diego, except when Marine Stationed aboard warships anchored in the harbor participated in parades in connection with various celebrations.

20 March 1911: A small force of Marines under the command of Colonel Charles A. Doyen established Camp Thomas on North Island to exhibit a show of force, under the guise of military exercises, to Mexico.  Camp Thomas was disbanded in June 1911. 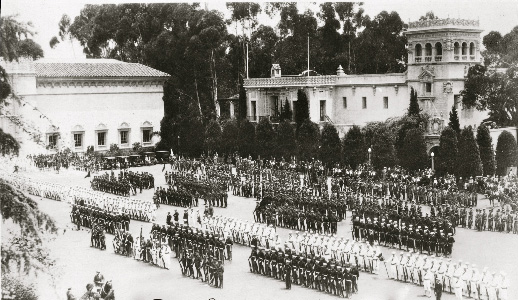 Marines and Sailors stand in formation at Balboa Park in 1915

7 & 10 July 1914: Marines of the 4th regiment, under the command of Col Joseph Pendleton and aboard the U.S.S. SOUTH DAKOTA, JUPITER AND WEST VIRGINIA landed on North Island.  They constructed Camp Howard from which the idea of a permanent Marine Base in San Diego grew.  The 4th Regiment consisted of two battalions.  First Battalion included the 25th, 26th, 27th and 28th companies.  Second Battalion was composed of the 31st, 32nd and 34th companies.

11 December 1914: the 2nd Battalion and 25th Company of the 4th Regiment moved to a section of Balboa Park known as the Palisades and established and maintained a model camp and a Marine Corps display for the Panama-California Exposition.

19 December 1914: Marine Barracks, San Diego, was activated when Marines were ordered to exposition duty at the Panama-California Exposition.

15 March 1919: Ground breaking for the first phase of construction began. The head of Naval Affairs, Congressman Lemuel P. Padgett, had the honor of turning the first shovel of dirt. He passed the shovel to Congressman William Kettner.  The initial phase included the six arcade barracks, and administration building and officers’ quarters. 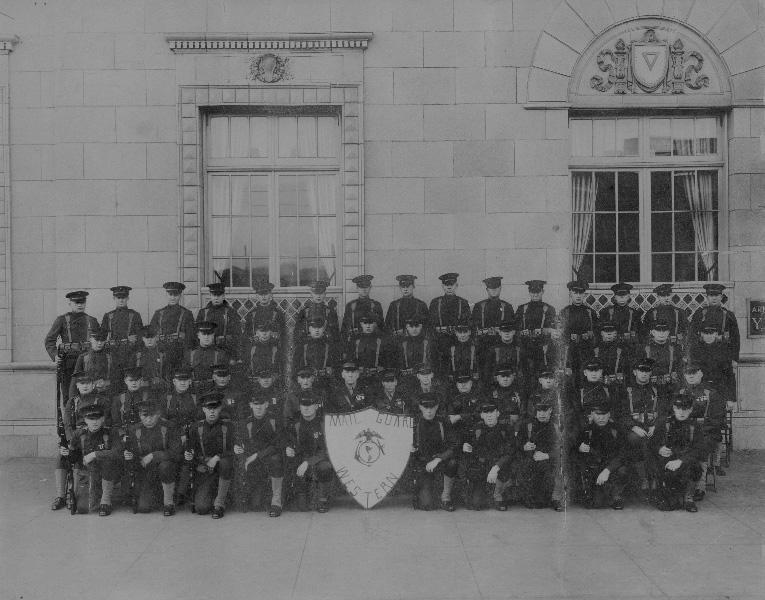 1 December 1921: The first Separate Battalion, 5th Marine Brigade was assigned to open and operate the “Marine Advanced Expeditionary Base, San Diego.” Corporal of the Guard, Thomas H. Crosby ran up the flag, “without fanfare.” The first Marines to be stationed aboard the base consisted of one gunnery sergeant and 12 corporals. Initially, the base was known as “Headquarters, 5th Marine Brigade.”

2 August 1923: The Recruit Training Station for the West Coast, under the command of Major E.P. Moses, relocated from Marine Barracks, Navy Yard, Mare Island, to San Diego on the USS Sirius, AD-15.  Arriving with the Training Station were Sea School and Field Musics School.

1926: The base became home to the Western Mail Guards, a special group of Marines assigned to provide security for the U.S. mail.

1927: The base became a staging ground for the expeditionary service in China and Nicaragua.  Between February and April, 261 officers and 4,074 enlisted men assembled at the base for transport to duty in Tientsin and Shanghai, China. 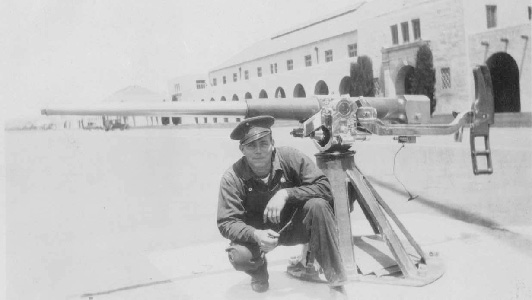 10 December 1931: Command of the three operating aircraft squadrons that comprised West Coast Expeditionary Force, was transferred to the Commanding General, Marine Corps Base, San Diego.  The squadrons, Fighting Squadron Ten-M, Observation Squadron Eight-M and Utility Squadron Seven-M remained at Naval Air Station, North Island.  In addition there were Headquarters Detachment and Service Company Two-M.  The organization was analogous to an infantry battalion, varying in strength from 200 to 300 men and about twenty officers.

1932: The following organizations were maintained at the base: Base Headquarters Company, Base Service Company, Fifth Company Engineers, Sixth Battery of Artillery, Recruit Depot, Sea School and the First and Second Casual Companies.

21 December 1934: The Marine Corps leased 19,298 acres of a 32,000-acre section of land in the Kearney Mesa area from the City of San Diego to use primarily for artillery, anti-aircraft, and machine gun practice for various unites assigned to the base.  The area was collectively referred to as Camp Holcomb.  On 14 June 1940, Camp Holcomb was formally redesignated Camp Elliot.

1935: The Fleet Marine Forces were relocated to Marine Corps Base, San Diego. 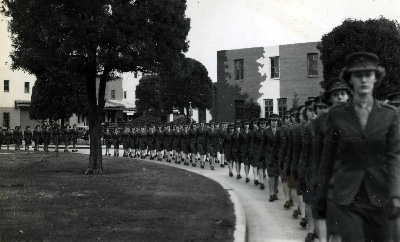 1943: Women Reserves were assigned to the base.

October 1943: Nine Marines from a Marine Corps training camp at Pine Valley were killed fighting a fire in Hauser Canyon in the Cleveland National Forest

21 April 1948: Soochow, mascot of the 4th Marines in China and mascot of the Recruit Depot, passed away.  Soochow was captured at Corregidor and spent nearly three years in various prisoner of war camps.  After his liberation in February 1945 he was taken to Marine Corps Base, San Diego, where he lived the remainder of his life. 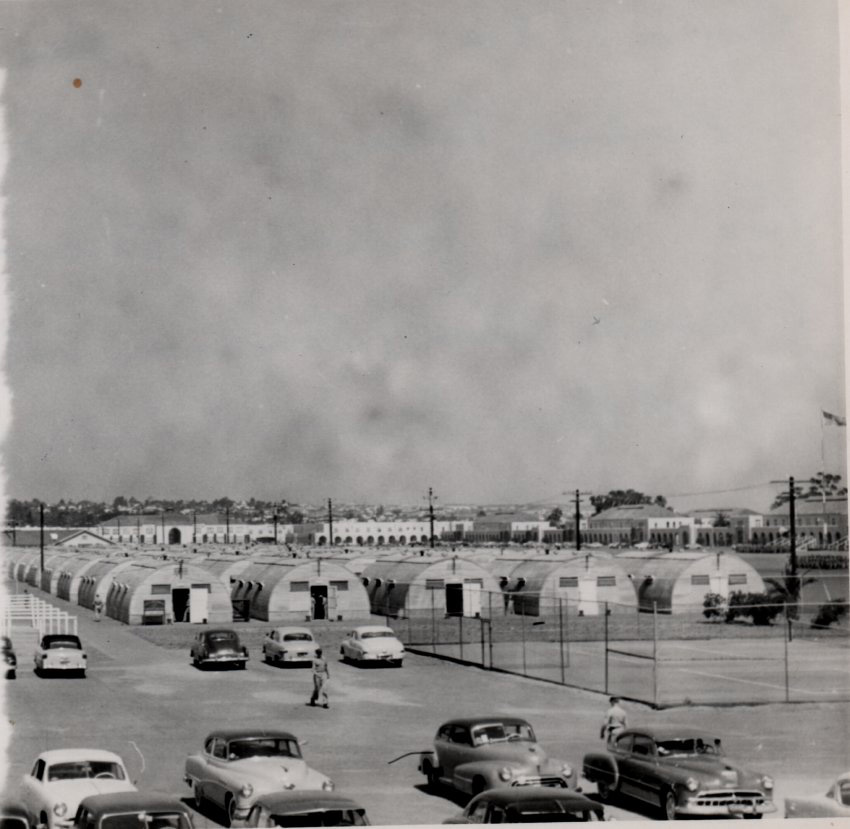 1950-1953: The Recruit Training Command grew from three to eight battalions to handle the troop requirements for the Korean War.  More than 700 Quonset huts wee erected to handle the influx of recruits. 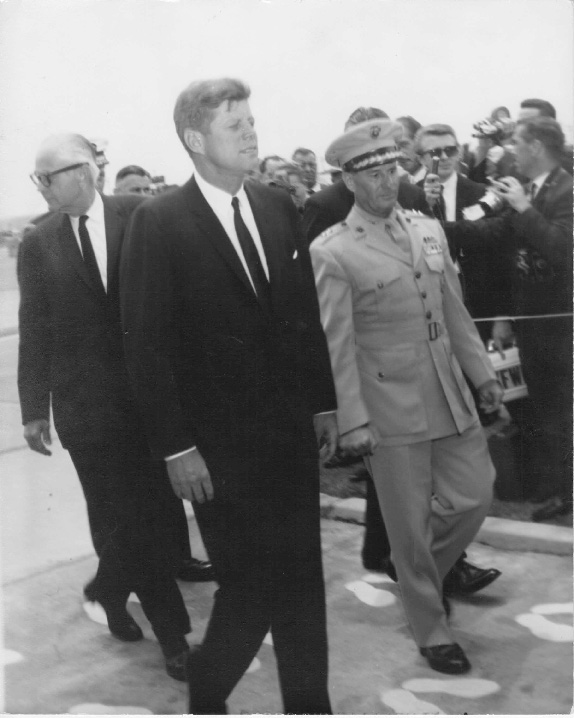 6 June 1963: President John F. Kennedy made a Presidential Visit.  His itinerary included a visit to the Receiving Barracks, recruit billets in the Quonset Huts, and various training areas.  He observed close order drill, inspected a platoon of Marines graduating from Sea School and addressed military personnel at Hall Field.

6 June 1963: A photograph taken of President John F. Kennedy standing on the yellow foot prints is the first image we have of the famous foot prints.

1965-1979:  The Vietnam War caused the next period of major expansion.  A 100-tent cantonment was erected to handle the overflow of recruits.  Five new recruit barracks, Buildings 554, 555, 584, and 585, a new dining hall, new bowling alley, a new Regional Dental and Medical Clinic were constructed on the depot. 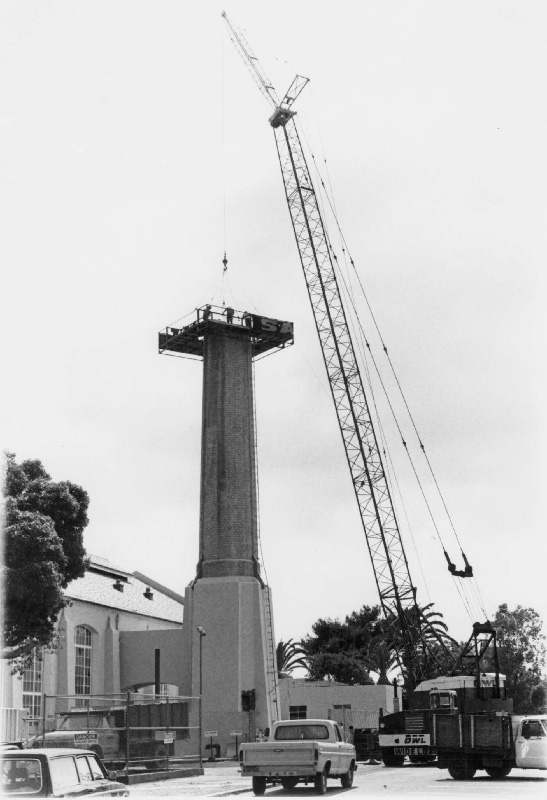 1 February 1971: The Communications-Electronic School Battalion was officially detached from Recruit Depot San and relocated to Marine Corps Base, Twentynine Palms, completing a move that began in 1967.  Sub Unit Two, Communications-Electronic School Battalion, was officially activated as a tenant organization, reporting directly to the Commanding General.  This command consisted of Bravo Company, the Operational Communications School, and Delta Company, The Electronics Fundamentals School.  The sub unit was to relocate to Twentynine Palms as soon as adequate facilities were made available there.  This occurred in September 1975.  On 24 September 1975, Sub-Unit Two was officially deactivated.

1 July 1971: Recruit Training went into a nine-week training schedule in order to put more emphasis on the “finishing phase of recruit training.

1October 1973: The first issue of M-16A1 rifles to recruits began.  Recruits arrived at Edson Range on 3 November to commence marksmanship training with the M-16A1 Service Rifle.  On 9 November, Pvt Ben E. Carey, Platoon 2095, fired the last shot from a M-14 rifle at the 500 Meter Line.  By 31 December, the M-16A1 rifle had completely replaced the M-14 as the basic weapon for recruits.

November 1973: A bayonet Assault Course was implemented into the Close Combat Course of Instruction.  The course consisted of four lanes of ten simulated opponents apiece, which recruits negotiated by correctly demonstrating the techniques of close combat.

1975: “Old Smokey”, the base incinerator and a depot landmark, was torn down.

18 May 1976: Each battalion in RTR increased to four companies when Companies D, H and M were activated.

1977: The Recruit Depot purchased three 40-mm saluting guns and Facilities Maintenance installed them at the northern edge of the parade field. Only two guns were to be used to fire; the third is loaded and used in case of misfires.

24 February 1977: The Woman Marine Company held its final formation before being dissolved. The personnel were absorbed into other units. 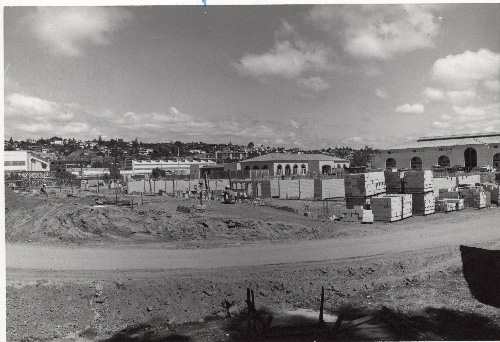 10 November 1987: The Command Museum officially opened its doors in Building 26.

8 December 1987: Sea School was deactivated mainly because duties once performed aboard ships by Marines had been assumed by sailors. 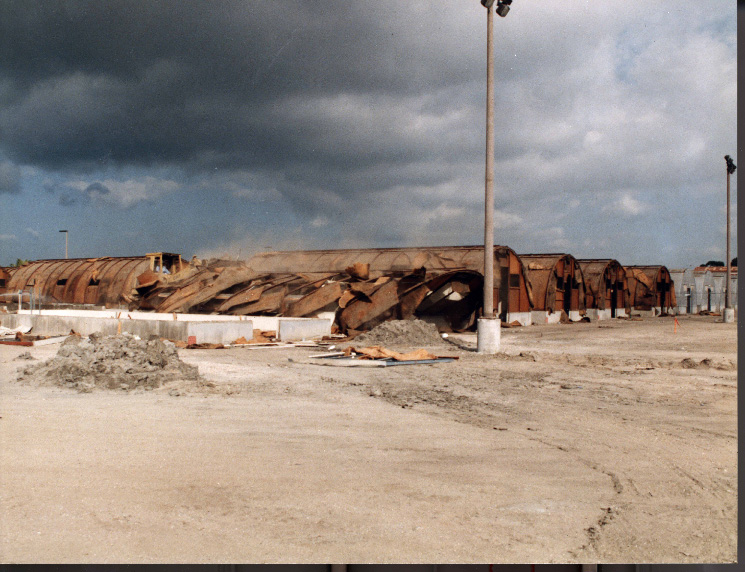 1990-2002: Several new buildings were constructed, including a reviewing stand, a childcare center, a water-survival training tank and a field house.

16 July 1992: The Depot’s fifty-foot wooden rappel tower was replaced by a new one of the same size with a steel frame cement construction.  The new tower has “fast-rope” capability, a new staircase style ladder, and a larger platform

September – October 1994: A new depot club structure went into effect.  It included a combined club bat the bowling alley, the Comfort Zone, and a combined SNCO and Officers Club, the Bay View.  The Devil Dog Inn closed in November.

April 1995: The Marine Corps Absentee Collection Unit relocated to MCRD from Treasure Island.  It occupied an office in Building 12.

1996: A new Slide for Life was constructed in the Depot’s Physical Training Area.

1996: Several major changes in recruit training went into effect.  Recruit Training was extended and extra week.  “Mess and Maintenance Week” became known as “Team Week.” A 54-hour long “crucible” consisting of eight major events, accomplished while undergoing sleep and food deprivation was added.  Upon successfully completing the Crucible, recruits receive a cap emblem and are Marines from that time forward.  The first crucible was completed on 14 December.

September 1996: Female Marine drill instructors were authorized to wear the campaign hat. At the time, only one female DI was assigned to San Diego’s recruit depot

1997: Eighteen Quonset Huts were demolished to make way for the new Swim Tank.

1998: Instructors at the Depot Swim Tank began providing a two-week work-up course to prepare Marines for the Marine Corps Instructor of Water Survival School, held at the Naval Amphibious Base in Coronado.  This school is one of the most physically demanding in the Marine Corps.

April 1999: The Jack in the Box restaurant was demolished and construction began on a new food court.

16 July 1999: The new Swim Tank, Parke Hall, was dedicated.  It was named after Capt. Edward Parke, USMC, Commanding Officer of the Marine Detachment aboard the U.S.S. INDIANAPOLIS.